What is a Sensory System? 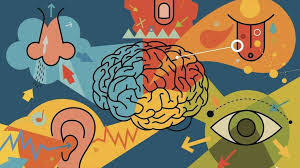 All sensory systems have receptor cells that are specialized to detect a particular type of stimulus. For example, hair cells in the inner ear have cilia that move in the presence of sound waves, while olfactory receptor neurons in the nasal cavity have receptors that bind to odorant molecules.

The presence of an appropriate stimulus triggers electrochemical changes in the nervous system. This stimulus typically changes the membrane potential of a sensory neuron, triggering an action potential. The information is then transmitted from the sensory organ to the spinal cord and then the brain, or directly to the brain (as in the visual system).

The different types of sensory information—also called modalities—travel in different pathways through the central nervous system, but most are transmitted to the thalamus—a structure in the 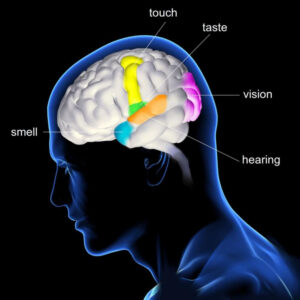 middle of the brain. From here, sensory information is typically sent to areas of the cerebral cortex dedicated to the analysis of specific modalities—for instance, primary visual cortex or primary auditory cortex.

These areas, in turn, send information to the association cortex, where sensory information is integrated with other types of information for higher-level analysis. Ultimately, the neural processing that occurs throughout these pathways and networks allows for accurate perception of sensory stimuli—such as the identity and location of objects in the visual world, or the understanding of speech.

Surprising Facts About the Five Senses!

Hearing
The sense of hearing is actually due to a response to mechanical stimuli; vibrations are converted into nerve impulses that the brain receives.
Sensible facts:
·        Humans can hear sounds up to 20 kHz. The greater wax moth can hear sounds up to 300 kHz!
·        The cilia in the ear push earwax out of the ear naturally.
·        Snakes hear from their jawbones! No, really. Their inner ears are connected to their jawbones, so vibrations travel from the jawbones to the ear before being processed.
·        Hearing and touch are the only senses that are types of mechanosensation.
·        The human ear is made of three sections. The middle ear contains the smallest bones in the body, known as the ossicles (hammer, anvil, and stirrup).
·        Crickets hear using organs called tympanum on their front legs. 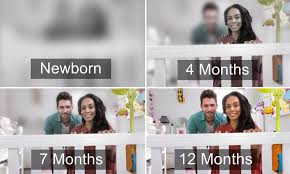 Sensible facts:
· People blink 15 times per minute on average.
· Everything would appear two-dimensional to a person with only one eye.
· Human eyes are made of over two million working parts.
· Newborn babies see everything upside down until the brain learns to process everything right side up.
· Dolphins sleep with one eye open. Creepy? Or super smart?

Touch
The way the sense of touch works is complex. Simply put, a stimulus triggers activity in a sensory neuron, which then passes to the part of the brain that’s assigned to the proper body location.
Sensible facts:
· The sense of touch is the first to develop in humans at about 8 weeks into the gestation period.
· Touch stimulates the brain to release endorphins.
· Blood pressure and heart rate can be reduced by a touch.
· Whiskers are used by animals for tactile sensing for a number of survival purposes, including navigation, detecting water currents, and texture discrimination.
· Grasshoppers have hairs all over the outside of their bodies to detect air movement. 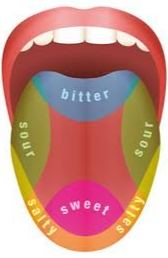 When a substance reacts chemically with the receptors of taste buds, the sensation of taste is created.
Sensible facts:
·        People lose their perception of taste as they age. By age 20, half of their taste receptors are gone.
·        A snake has no taste buds on its tongue. It uses its tongue to bring smells and tastes into its mouth. Receptors in the pits of the snake’s mouth transmit the information to the brain.
·        The catfish has about 100,000 taste buds (the average human has about 10,000 taste buds).
·        A human’s taste sense interacts with other senses and factors, including smell, texture, and temperature.
·        The five basic tastes are saltiness, sourness, sweetness, bitterness, and umami.

Smell
Last, but not least, is the good ol’ olfactory perception sense. Smell happens in humans when the brain receives signals after molecules in the air bind to sites on olfactory receptors.
Sensible facts:
·        Every person smells things differently. This is because of the over 900,000 genetic variations of olfactory receptors. That lemon cake you smell and rave about to your friend? It might smell more like the inside of a shoe to your friend.
·        Good smells make you happier!
·        Dogs recognize and identify humans first by scent.
·        Odors can accelerate puberty, attract mates, and alter menstrual cycles in humans.
·        Grizzly bears can smell food from up to 18 miles away.

To see how chiropractic care can enhance your senses, click here!