This recipe for spaghetti squash with paleo white bolognese sauce is sure to please picky eaters and is a perfect dish for the fall. The tomato-free bolognese sauce is the perfect topping for spaghetti squash noodles. The whole combination is paleo and AIP-friendly. Just omit the fennel seeds and red pepper flakes if following an autoimmune paleo protocol and sub chicken stock for the white wine. You can add regular chopped fennel to the sofrito! 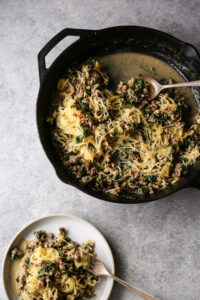 2.  Using the largest chef’s knife you have, cut the spaghetti squash in half lengthwise. It’s helpful to put a crumpled dish towel on your cutting board to stabilize it, or to remove a little bit from both ends so you can stand the squash upright without it wobbling. Scoop out the seeds and stringy bits from the center cavity.

3.  Season the cavity and arrange both cleaned squash halves cut-side down on a parchment lined baking sheet. Add 1/2 cup water to the pan (this will help steam and soften the squash). Bake in the oven until the squash is tender, meaning a fork can easily be inserted from flesh to skin, about 45 minutes. Flip the halves over to allow them to cool. When safe to touch, use a fork to shred the spaghetti strands from the squash: begin along the edges, pulling the strands towards the center, then scoop the bundle into a bowl.

4.  While the squash is roasting, make the sauce: in a large wok or skillet, heat a thin layer of olive oil over high heat. Add the beef and brown over high heat, breaking it apart with your spatula into bite sized pieces, until golden brown and cooked through. Fold in the celery, scallions, garlic, fennel seeds, sea salt and red pepper flakes. Cook two minutes more, until fragrant. Add the wine and scrape up any brown bits that may have formed. Simmer until the liquid has nearly evaporated. Pour in the coconut milk and stock. Gently simmer over medium-low heat until the sauce has thickened by at least half, about 10 minutes. Continue to cook over low heat, adding more liquid as necessary, until the squash is ready for the next step, about 20 minutes, or up to an hour. During the last 10 minutes of cooking, fold in the spinach.

5.  Combine the cooked spaghetti squash with the white Bolognese sauce and serve immediately.

If you want to view the original recipe, check it out here. We also have healthy recipe inspiration on our website here!